Also released was Ibrahim Abubakar. The News Agency of Nigeria reports that Zainab was arrested since Dec. 25, 2018.

The Permanent Secretary, Ministry of Foreign Affairs, disclosed this at a news conference in Abuja on Tuesday.

He said the government has been able to establish the innocence of Zainab and the second Nigerian involved in the case, Ibrahim Abubakar.

Both accused, he said, would be released tomorrow to the Nigerian Mission in Saudi Arabia.

There had been several calls for their release with President Muhammadu Buhari directing the Attorney-General of the Federation and Minister of Justice, Mr. Abubakar Malami, to swiftly intervene and secure her immediate release.

The Senior Special Assistant to the President on Diaspora Affairs Abike Dabiri-Erewa had assured Nigerians that they were making good progress and she will be back, along with 2 others in the same situation.

Zainab was arrested after a banned drug, Tramadol, was found in her bag, but claimed it was planted in her luggage by unknown persons.

The student had reportedly travelled from Mallam Aminu Kano International Airport in company with her mother, Mrs. Maryam Aliyu, and sister, Hajara Aliyu.

Zainab, who was accused of entering Saudi Arabia with an illegal dosage of Tramadol.

Reports indicate the she was a victim of a cartel that specialised in keeping hard drugs in travellers’ bags, some of whom were already in the custody of the National Drug Law Enforcement Agency.

In Kano on Tuesday, some students of Yusuf Maitama Sule University, her school, protested against her arrest and detention.

The students, who marched from the temporary site of the University to Government House, Kano on State Road and later trekked to the Saudi Arabia Consulate at Ahmadu Bello Way, Kano, called for her immediate release.

The students who carried placards with various inscriptions, called on Saudi authorities to release the student in view of the fact that preliminary investigation had exonarated her from committing the offence.

Speaking to newsmen, the students’ spokesman, Sama’ila Auwal, said the decision to protest the arrest of Aliyu was borne out of the investigation carried out by the National Drug Law Enforcement Agency (NDLEA) which indicated that their colleagues was innocent.

“We want Saudi authorities to consider the investigation conducted by NDLEA which revealed that she was innocent because a drug syndicate at Malam Aminu Kano International Airport tagged a bag with her name.

“We need Justice for Zainab, we want her released hence our decision to stage the peaceful protest to show our concern over the matter,”Auwal said.

He, however, commended President Muhammadu Buhari for directing the Attorney-General of the Federation and Minister of Justice to facilitate her release.

“Zainab Aliyu is not guilty that is why we are calling for her immediate release from detention, “he said.

At the Government House, the Secretary to the Government, Alhaji Usman Alhaji, addressed the protesters on behalf of Gov. Abdullahi Ganduje.

He urged the students to remain calm as the Federal Government was doing everything possible to secure her release.

According to him, the state government was also concerned over the plight of Aliyu who had also been exonerated from the case.

At the Saudi Arabia Consulate, two students were selected to meet with the Consul.

The news of the release of Zainab has started garnering commendations and social media comments.

Reno Omokri, a former aide to ex-President Goodluck Jonathan and an ardent critic of President Muhammed Buhari, had course for almost for the first time since their ouster in 2015, to commend Buhari.

In a tweet, he said: “I celebrate the @MBuhari government for securing Zainab Aliyu’s release in record breaking time. President Buhari is to be commended. Now, I urge the President to apply the same sense of urgency that he showed for Zainab towards Leah Sharibu and make #FreeLeahSharibu a reality.’’ 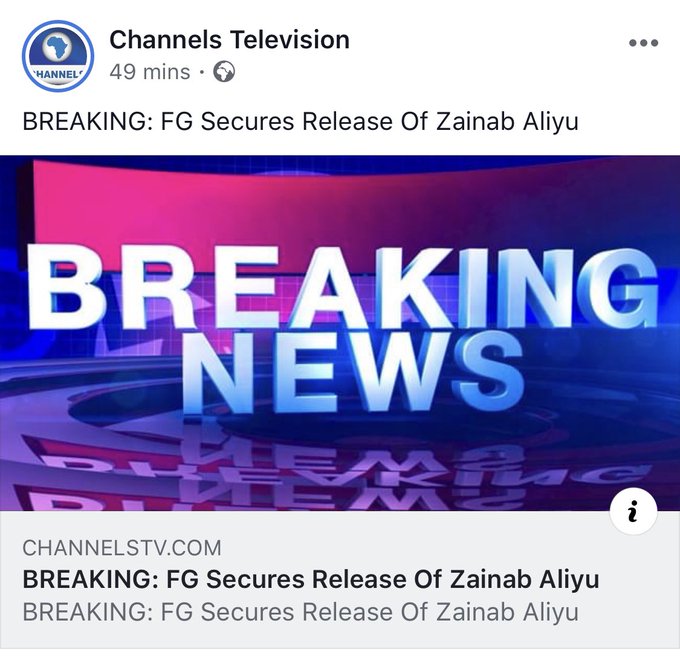 I celebrate the @MBuhari government for securing Zainab Aliyu’s release in record breaking time. President Buhari is to be commended. Now, I urge the President to apply the same sense of urgency that he showed for Zainab towards Leah Sharibu and make #FreeLeahSharibu a reality

Also in his tweet, BashirAhmaad confirmed that the Federal Government has secured the release of Zainab Habibu Aliyu who was arrested in Saudi Arabia for alleged drug trafficking. Details soon from Ministry of Foreign Affairs. #FreeZainab.

Also Amnesty International (AI), an international organisation that has been having a running battle with authorities also commended Nigeria for the securing Zainab.

Amnesty Int. Nigeria tweeted: “A welcomed development that Zainab Habibu Aliyu is free. But that is not enough, more needs to be done to ensure freedom of all Nigerians held by Saudi Arabia’s flawed judicial system’’.

You may have missed